The Mother Teresa Foundation, on the behest of The Thanjavur District Collector Mr. Dinesh Ponraj Oliver, handed over 2 houses to 2 vulnerable, deserving families who had petitioned him for help. A portion of the required funds were allotted under the Green House Scheme (Pasumai Veedu Thittam) of the Tamil Nadu Government. Yagappa Educational Institutions in Thanjavur made a financial contribution to this project as well. In addition to the putting in the remaining monetary requirement, the construction of the houses was fully taken up by the Mother Teresa Foundation.

These projects were completed under our The Community Development Program.

Chellammal, a single mother, whose daughter Thamizhselvi who was also abandoned by her husband has a son, Velmurugan. The Mother and Daughter work as Coolie labourers and earn a meagre living. Velmurugan has just completed his 12th grade schooling with above 90% marks. (The Mother Teresa Foundation is sponsoring his future education through our Scholarship Program)

The house they were living in was severely damaged during the cyclone Gaja in 2018. And in the last 4 years, they have struggled to live in their house that was exposed to all the elements. They had temporarily managed to cover the thatched roof with a plastic tarp.

Sebastian, a coolie worker who was severely injured and disabled when a pit he was digging, caved in. He has been completely incapacitated since he was buried for a while before he was rescued. He is unable to even take basic care of himself and cannot even stand up. His wife was also a coolie labourer. Their daughter, with two small children is widowed and also lives with them.  Their son Selvarathinam, currently employed in a small private company, is the sole breadwinner for this family. They used to reside in a mud-wall hut with a thatched roof, that was completely broken-down and in an un-liveable state.

Upon being made aware of their plight, The District Collector Mr. Dinesh Ponraj Oliver, who has, since taking charge of his post, helped the poor to the best of his ability; decided to take action and issued a government order allocating funds under the Green House Scheme (Pasumai Veedu Thittam) of the Tamil Nadu Government. This fund however is not fully sufficient to construct a house. Our Foundation was contacted by him to help, we obliged.

On the 4th of July 2022 The district collector Mr. Dinesh Ponraj Oliver along with our chairman Dr. AR Savarimuthu handed over the 2 completed houses to the beneficiaries. They have paved a way for these 2 families to break their cycle of poverty and ensure the security of their futures.

A wheelchair was also sponsored by The Mother Teresa Foundation to Sebastian during this event.

The Mother Teresa Foundation has 2 other projects currently being constructed under the same arrangement with the district administration. We hope to continuously make a positive impact on the lives of the needy and uplift the society as a whole. 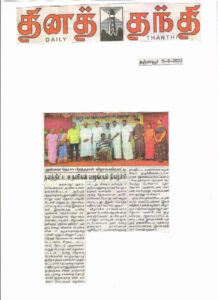 Press Coverage of our event at Rameswaram which celebrated St. Mother Teresa’s 112th Birthday and provided Scholarships and Assistance 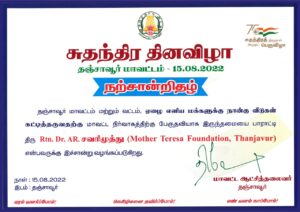 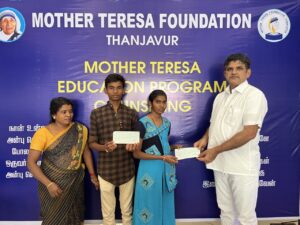