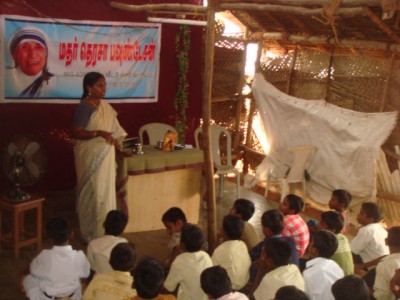 As a part of Mother Teresa Educational program, our Foundation has planned to organize orientation program every Sunday to enthuse the children of Anbu Illam to start with and to expand the same to cover the day scholar beneficiaries shortly.
This program was inaugurated on 03.07.2011 and Mrs. Punitha Ganesan Educationist and secretary of Bharath college of Science and Management, Thanjavur conducted the program which benefited around 70 children of the Home. In her inspiring speech she gave many valid tips which would shape the future of the children and pave way for betterment in the field of education.
She has also assured maximum help to the foundation for the educational program. The children interacted with her freely and got their doubts clarified. The chief guest gave a patient hearing which promoted the self confidence of the children shunning their complex which had under mined their potentials due to social and economic constraints.
Rtn. A. Savarimuthu, Managing Trustee thanked the chief guest for conducting the day long workshop and motivated the children.